Quite a bit of scientific evidence has been unearthed over the past decade that illustrates the many potential health benefits of using medical marijuana. This amazing plant species has shown a potent ability to combat a variety of health conditions that are notoriously difficult to treat with traditional medicine techniques. Could IBS be one of the many disorders that reacts positively to medical cannabis treatment? Let’s take a more in-depth look at the relationship between medical marijuana and IBS below:

IBS is an acronym that stands for “Irritable Bowel Syndrome.” Irritable bowel syndrome isn’t actually just one specific disease; this term stands for a collection of physical symptoms that range from abdominal pain, chronic discomfort, inflammation, to surprising changes in bowel movement patterns for no apparent reason at all. Unfortunately, the symptoms that IBS usually causes occur for quite a long time, sometimes even for years.

There are four main types of IBS and they are characterized by certain bowel movement symptoms.  The classes of irritable bowel syndrome include:

This type of irritable bowel syndrome is characterized by regular bouts of diarrhea.

This type of irritable bowel syndrome is defined by consistent constipation issues.

This type of IBS involves consistent issues with both diarrhea and constipation.

This last type of IBS is characterized by a lack of both diarrhea and constipation problems.

IBS is known as a “functional” gastrointestinal medical condition. While it can be very painful, cumbersome, and irritating, IBS causes the development of other more serious diseases or negatively impacts overall life expectancy. However, since this condition can drastically affect a person’s quality of life quite negatively, it can be very hard to deal with. This is why many people with irritable bowel syndrome are also affected by overwhelming depression, anxiety disorders, or chronic fatigue.

What Are the Main Causes of IBS?

While irritable bowel syndrome is somewhat common, no root cause for this class of symptoms has ever been determined. However, there are quite a few theories. They range from:

3) Bacterial overgrowth in the intestines (especially the small intestines)

4) Sensitivity to certain foods or drinks

Since IBS is still a very confusing medical condition, medical professionals usually diagnose their patients with it only after completely ruling out other gastrointestinal ailments and making sure that the most worrisome symptoms are absent. Alarming features include:

1) Blood in the stool

4) A family history of gastrointestinal or inflammatory bowel diseases

Always make sure to get checked by your doctor if you are having consistent gastrointestinal concerns. What you might think is IBS could actually be a sign of something far worse. It is always a good idea to be safe and make sure you get a professional diagnosis when you are dealing with a consistent health problem.

What Are the Most Common Traditional Treatments of IBS?

Since there is no known root cause for irritable bowel syndrome, doctors usually try a combination of different treatment plans in order to keep the gastrointestinal inflammation, discomfort, and pain in check. However, the effectiveness of these treatments can vary quite a bit depending on each individual. The most common traditional medical treatments include:

Prescription medicine is quite effective at reducing some of the primary symptoms of IBS. However, their positive attributes usually come with a few negative side effects as well. The most commonly used prescriptions against irritable bowel syndrome are loperamide to counteract diarrhea or laxative medicines to reduce constipation. Antidepressant medications are also often used to combat the feelings of stress and sadness that are common in irritable bowel patients.

Since IBS is a gastrointestinal disorder, it only makes sense that altering a person’s diet could cause significant improvements. Dietary changes that are often used to combat IBS include:

Our digestive tracts are lined full of different strains of bacteria. Many of these bacterial species are quite effective at helping us break down certain foods, absorb the proper nutrients, and fight off malevolent pathogens. Unfortunately, the numbers of these helpful bacterial strains can dwindle occasionally. Luckily, there are many probiotic products available in your local supermarket that can help introduce beneficial bacteria back into your gut biome. Commonly-found probiotic foods include:

There also many pills or drinkable “shots” full of probiotics, if that happens to be the preference of the user.

Since anxiety and depression are very common side effects of IBS, it only makes sense that mental therapy can be of extreme help to those dealing with this worrisome condition. A good relationship between the patient and any doctors that they are getting care of is critical to the treatment of irritable bowel syndrome.

How Effective Can Medical Marijuana for IBS Be? 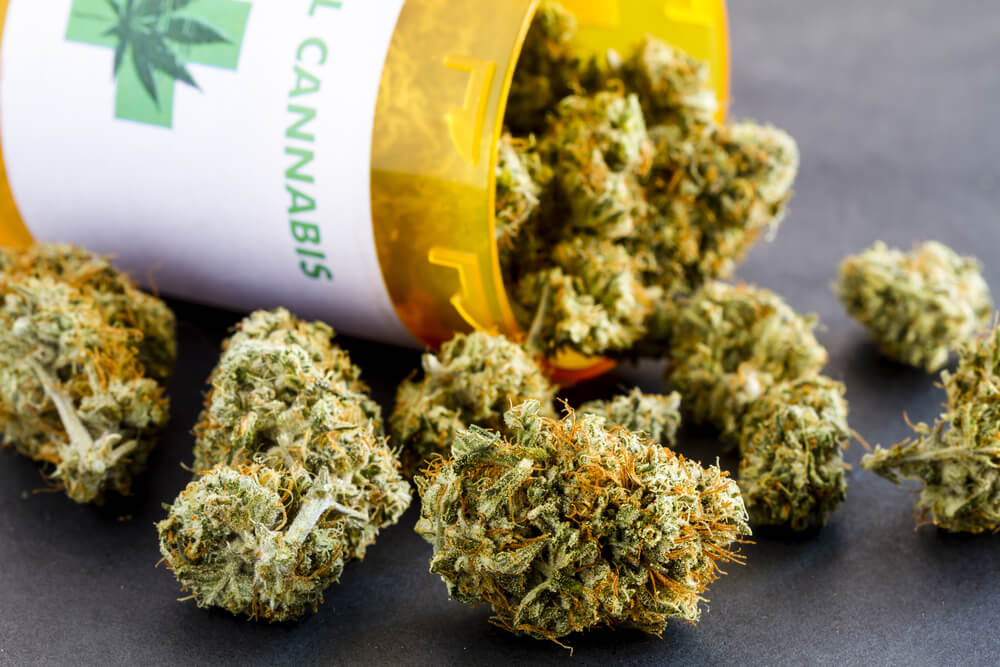 Medical cannabis may help treat a number of symptoms related to IBS without causing many long-term side effects seen with prescription medicine. Cannabis has a long history of alleviating many types of gastrointestinal distress and inflammation throughout the body. Marijuana is also very effective as a mood enhancer and is often used to help combat depression and anxiety in certain people.

On top of these factors, there are also some signs that cannabis may affect a potential root cause of IBS. One of the premier researchers on the topic, Ethan B. Russo, theorized that IBS could be caused by a deficiency of endocannabinoids that our bodies produce. These compounds are critical for a major regulatory “computer” within our bodies known as the endocannabinoid system to work properly.

Since the endocannabinoid system helps control the digestive system and our overall pain/inflammation response, it makes sense that a malfunction in this part of our body could cause IBS symptoms. This theory is further enhanced by the fact that irritable bowel syndrome sufferers are also often affected by other chronic pain conditions, such as migraines and fibromyalgia. Luckily, marijuana compounds, known as cannabinoids, have a very similar chemical structure to endocannabinoids.  This is why cannabis use has shown the capability to eliminate deficiencies in the endocannabinoid system. However, more research still needs to be done in order to fully confirm the benefits of marijuana use on IBS.

By now you should be feeling a bit more comfortable with the possibility of using medical cannabis for IBS. Are you or a loved one looking for the best medical marijuana IBS relief?  Well, it should be noted that if you are a resident of the state of Florida, it is possible for you to obtain a medical cannabis card if you are suffering from a qualifying condition. Want to know more about this potentially daunting process? Feel free to contact Biofit! We would be happy to help inform you on the best way to go about getting your cannabis card or clarify any irritable bowel syndrome medical marijuana concerns that you may still have. Please give us a call or visit our offices if you live in the greater Miami metropolitan area, today.