Is Smoking Marijuana Before or After Surgery Safe?

Home/Tips/Is Smoking Marijuana Before or After Surgery Safe?

Is Smoking Marijuana Before or After Surgery Safe?

If you have ever had a surgical procedure, you already know how important it is to follow the pre-surgery process exactly. Most surgeries require the patient to undergo a rigid, yet necessary preparation that involves a fasting period from food, water, and other medications for a certain amount of time. This is to reduce the chances of many dangerous, and even potentially life-threatening complications from occurring.

For a growing number of us, medical cannabis is a medicine that we rely on regularly to combat certain chronic ailments. But is this particular plant (that is so well-known for causing very few negative side effects) one of the medications that need to be avoided before having a surgical procedures? Let’s look at the potential consequences of smoking marijuana before surgery.

What Should I Know About Smoking Weed Before Surgery?

Even though medical marijuana provides many people with quite a few benefits, using it can actually be problematic before surgery. Unfortunately, there isn’t very much scientific evidence available that can confirm the full extent of these problems. However, it is almost always a good rule of thumb to avoid inhaling any type of foreign substances in the weeks before a surgery. This is because some commonly inhaled substances such as nicotine have been known to cause surgical complications. Research statistics indicate that smokers of any type of product have a much greater chance of being on the ventilator for an extended time, healing with additional scarring, or developing pneumonia or other serious illnesses after surgery than non-smokers. On top of these factors, many medical professionals have noted that marijuana use (whether smoked or not) seems to make certain patients more likely to become agitated during a surgical procedure.

Even if you feel that using marijuana to help assuage the anxiety and stress before surgery may be a good idea, it is almost always better to play it safe and completely avoid it. Luckily, due to increased legalization of cannabis throughout the United States (for both medical and recreational reasons), more accredited research will certainly be conducted to confirm marijuana’s effects as a growing number of people in legalized areas need surgeries of their own.

What Is the Relationship Between Marijuana and Anesthesia?

One of the main reasons that doctors require their patients to be in a fasted state before surgery is to keep their bodies as free of foreign substances as much as possible. This practice is mandatory to avoid any complications that can arise due to uncalculated interactions with anesthesia medications. Anesthesia describes a controlled state of mind and body where the patient’s awareness and ability to feel pain are temporarily eliminated. This physical and mental state is induced by extremely powerful medications. This class of medical compounds is what makes the many intensive and serious surgeries we are capable of nowadays possible; otherwise, the procedures themselves would simply be too traumatic and dangerous.

Unfortunately, cannabis use has shown an ability to affect the way that anesthetic drugs work before surgery. As a matter of fact, using marijuana (especially right before a surgical procedure) can drastically change the effective dose of anesthesia medication needed for proper sedation. For example, one of the most commonly used anesthesia drugs known as Propofol becomes far less effective in people who are regular cannabis users. Researchers and doctors have both noted that a significantly higher dose of Propofol is necessary to initiate the appropriate sedation in marijuana users when compared to non-users.

On top of these factors, using cannabis before surgery can be even more dangerous if the user primarily smokes it. This is because lung obstructions are more likely to occur during the procedure, especially if marijuana is smoked within the previous four hours. Lung obstructions are extremely serious surgical complications that can lead to a quick death; they are believed to be caused by a commonly diagnosed condition in smokers of any substance known as airway hyper-reactivity.

What Should I Know If I Smoke Weed After Surgery? 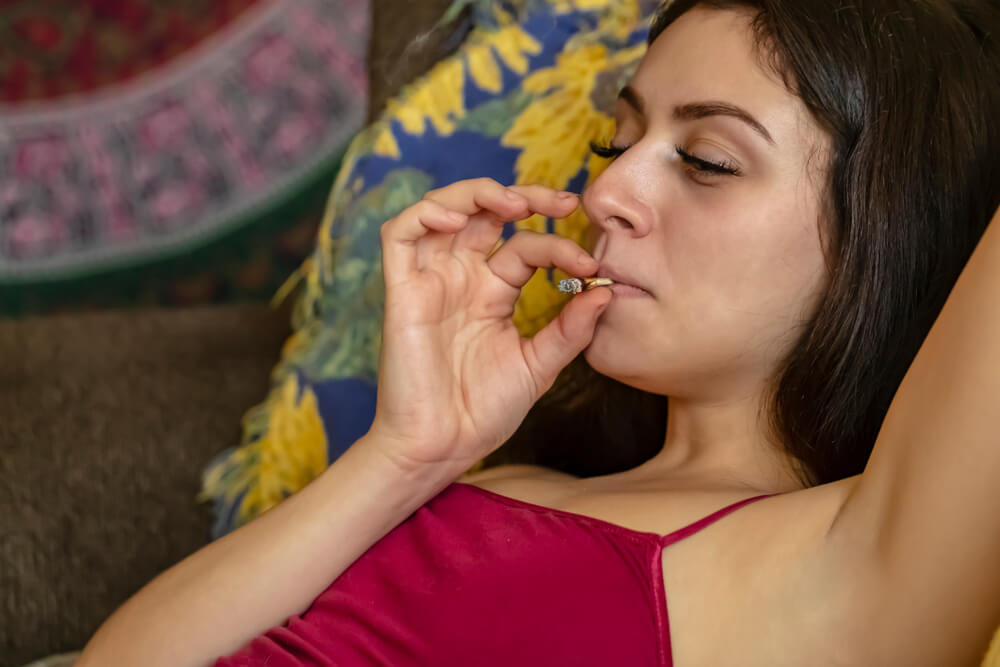 So it makes a lot of sense to avoid using marijuana before surgery to avoid any unwanted complications or interactions with anesthetic compounds. But do we need to avoid using cannabis AFTER a surgical procedure? The answer to that question really depends on how your body deals with weed and how serious your surgery was.

Cannabis has shown some powerful medicinal abilities in some research studies. As a matter of fact, this plant seems quite effective at reducing inflammation and sensations of pain throughout the body. Wouldn’t it make sense to use cannabis to help with these issues after surgery? As a matter of fact, sometimes it does. Typically, medical professionals tend to prescribe opioid medications to reduce post-surgical inflammation and pain. Unfortunately, while these medicines are quite effective, they can be quite dangerous and addictive (especially if used for an extended amount of time). Cannabis could cause far fewer negative side effects.

However, these factors don’t simply make marijuana completely safe to use after a surgery. Weed use can also cause increased heart rate, changes in blood pressure, nausea, or lung obstructions that can be troublesome while recuperating from certain surgical procedures. If you decide to use marijuana for relief during your recovery, make sure that you take it slow and monitor yourself for adverse effects before making it a habit.

What Are the Primary Dangers of Marijuana Use, in General?

There aren’t many serious dangers caused by cannabis use. As a matter of fact, there hasn’t been a single person throughout the entire history of humankind that has died as a result of a marijuana overdose. But a substance can still be dangerous if it doesn’t seem to have a known fatal dose amount.

Luckily, cannabis is well-known to cause very few side effects. Unfortunately, the most popular way (by far) to consume marijuana is by smoking it. Inhaling the smoke of any burning substance can cause short-term health issues such as lung inflammation and mucus buildup. Smoking can also cause long-term respiratory conditions such as lung cancer, emphysema and chronic obstructive pulmonary disease (otherwise known as COPD).

On top of these factors, marijuana smokers have a tendency to hold their inhaled “hits” of smoke in their lungs for an extended time to increase the number of benefits and psychoactive effects they enjoy. However, holding smoke within your lungs like this can lead to more damage than seen in traditional tobacco smokers. Just make sure to always monitor yourself for extended periods of wheezing, coughing, constriction of the chest, or difficulty breathing if you regularly smoke marijuana. If you do, you should probably take a break and seek a medical professional’s opinion.

Even though you should more fully understand the dangers of using marijuana before surgery, please keep in mind that medical cannabis can still be very helpful for a variety of physical and mental ailments if used in the right setting. Do you live in the state of Florida and want to learn more about how medical marijuana can help you? Honestly, you don’t even need to get your own medical cannabis card to get educated on the potential benefits of this industry. Please give us a call at Biofit today to learn everything about medical marijuana in Florida! Feel free to stop by our offices in the greater Miami metropolitan area as well.