Do you happen to suffer from chronic or severe pain issues? If so, you might be able to benefit from medical marijuana use. Medicinal cannabis has been prescribed and used to combat a variety of different health ailments quite effectively. Luckily, one of the common symptoms of disease or injury that this plant has shown great capacity to control is the sensation of pain.

Unfortunately, different strains of cannabis show varied levels of efficacy when it comes to eliminating discomfort. So what is the best marijuana strain for pain relief? Let’s take a deeper look at a few medical cannabis varieties that can help make you and your loved ones get through life a bit easier.

What Are the 11 Best Marijuana Strains for Pain?

It is a common misconception that the best weed strains for pain are indicas. While many indicas have fantastic pain-relieving qualities, there are many sativas and hybrids that can work just as effectively. We have included examples of all three cannabis varieties in the list below:

This particular strain is a result of a cross between Big Bud and Purple Urkle strains. It is commonly hailed as a “daytime indica” that helps reduce discomfort radically while allowing for increased productivity because it doesn’t seem to make users as drowsy as other indicas usually do. Grandaddy Purple is also known to help reduce muscle spasms, increase appetite, eliminate anxiety, and decrease insomnia.

Sour Diesel is one of the most popular sativas on the medicinal marijuana market. It was bred from Super Skunk and Chemdawg 91. Sour Diesel, as the strain name indicates, is well-known for its extremely prominent citrus aroma and flavor. It is also usually very sticky to the touch. Sour D has shown to have a profound effect on reducing high levels of anxiety and depression. Its effects are also known to last for quite a long time, probably as a result of its high THC content (which usually averages between 19 to 25 percent).

This powerful hybrid strain (which commonly tests at over 20 percent THC!) is well-renowned for its heavy smoke and powerful, long-lasting effects. OG Kush is a cross of three popular cannabis varieties: Chemdawg, Lemon Thai, and Hindu Kush. On top of this, OG Kush is not just great for numbing aches but also for reducing anxiety, insomnia, and depression.

Bubba Kush is a pure indica strain that is coveted for its very unique aroma and flavor profile. It is a heavier hitter that might actually help you fall asleep before you notice its intense pain-relieving effects! As a result, Bubba Kush is usually best used before going to bed. It has also shown tremendous potential at eliminating feelings of depression and stress. While its typical THC concentration of 14 to 20 percent may seem somewhat lower than other strains on the market, Bubba Kush packs a very powerful punch due to a large amount of CBD it contains.

This particular strain is characterized by its distinctive sweet blueberry flavor and aroma that has made it one of the most recognized cannabis varieties in the world. Blue Dream is also quite potent with an average THC percentage of between 16 to 20 percent. This plant is a blended hybrid of its two parent strains: Sativa Haze and Blueberry Indica. It is a great option to use for discomfort relief during the day since Blue Dream allows patients to keep their minds clear and focused. Not surprisingly, this strain can help take the edge off high levels of stress and depression.

Do you happen to suffer from significant muscle spasms or cramps to go along with your chronic pain? Then this indica strain might be perfect for you! Redwood Kush is known for its relaxation effects on the body as well, which makes it perfect for evening use as bedtime approaches. It has a prominent herbal flavor and aroma profile. Redwood Kush also typically contains higher amounts of THC than most other medical marijuana strains; as a result, many patients prefer to microdose it in order to keep its couchlock-inducing and mind-fogging properties at bay.

This sativa-dominant hybrid is one of the newer strains available on the market. Moose and Lobsta is well-known to help provide increased energy while also eliminating sensations of ache. This strain has a very unique aroma and flavor profile; it seems to smell of skunk, diesel, and tropical fruits at the same time! Many patients report that the effects of Moose and Lobsta are very fast-acting and powerful. Some even claim that they first feel relief in their heads and that the pain-relieving effects permeate throughout the rest of their bodies. This is a great strain to be on the lookout for if you suffer from pain, depression, stress, or a lack of energy. 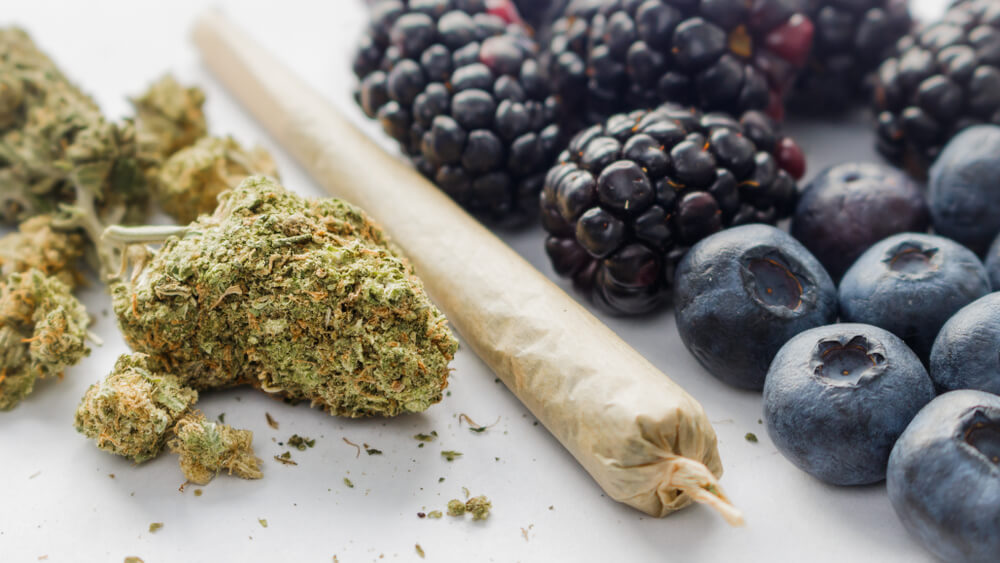 This flavorful strain is a hybrid that is produced by crossing Blueberry and Headband marijuana plants. The Headband part of the name is a result of a common sensation that is felt by many users: they feel as if they are wearing an actual headband. As a result, many people who suffer from severe headaches or migraines can benefit quite a bit from using this strain. It is important to note that while most Blueberry Headband plants tend to show a 50/50 split of sativa and indica qualities, certain phenotypes tend to be indica-dominant and can make patients drowsy. The buds are typically very resinous and sticky to the touch.

ACDC is a unique sativa-dominant hybrid strain that relies more on the cannabinoid CBD than THC for its pain-relieving qualities. As a matter of fact, ACDC plants average roughly 10 to 15 percent CBD while also containing less than 1 percent THC! Luckily, this lack of THC can be very beneficial for patients who want to reduce their chronic pain but want to avoid the euphoric mind-altering effects caused by this cannabinoid.

This powerful Florida-bred cannabis hybrid gets its name from the heavy coat of white crystal resin that covers its buds. It is also one of the best marijuana strains for pain. The White has an above-average THC content that usually lies between 18 to 23 percent. While its look is very similar to OG Kush, The White has almost no aroma and flavor profile.

Master Kush is an indica cross derived from some of the earliest landrace strains that came out of the Afghanistan and Hindu Kush regions. It imbues the body with powerful pain-numbing properties while also allowing the mind to stay active and focused. It is known to have an earthy, lemony smell.

Do you live in the greater Miami area and need some more clarification on what is the best marijuana for pain relief? Then please contact us at Biofit! We are one of the top medical marijuana education facilities in the state of Florida. It would be our pleasure to answer any questions you may have about the medicinal cannabis field.